Pre-settlement funding for Rhode Island lawsuits is an excellent way for plaintiffs to use a portion of their pending settlement proceeds for all their financial needs. A Rhode Island lawsuit loan with Baker Street Legal Funding money lender offers up to $2 million+ to qualifying victims with civil rights, employment, or personal injury claims. Get up to $10 million+ if you have corporate litigation in the Ocean State. 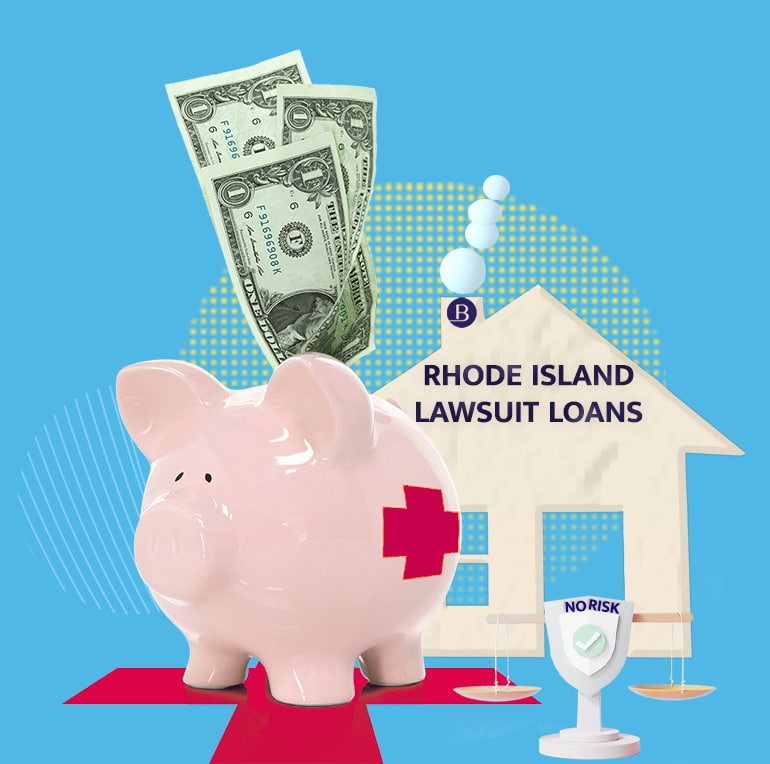 If you are ready to get the money you need to pay for your expenses such as rent, or medical bills, apply for a settlement loan in Rhode Island in a matter of minutes—upon approval, get a low fixed rate starting at 24% a year.

Baker Street Legal Funding is the community lawsuit loan company willing to work with our neighbors in Rhode Island. We offer a full range of non-recourse financial products to plaintiffs in Providence, Cranston, Warwick, Pawtuteck, Central Falls, Newport, or any other 39 cities in the Little Rhody state. We’ll help you figure out which cash advance best fits your case and situation, and then we’ll provide you a rate that lets you get the most out of your pending settlement money today.

The best news yet, lawsuit funding is risk-free in the state of RI, meaning you only pay back the pre-settlement funds if you win your case.

Get a lawsuit loan in Rhode Island — for when you need it.

When have a pending lawsuit, urgent expenses have a way of popping up at the most inconvenient times, especially when injured. Our Rhode Island pre-settlement lawsuit loans give you that extra peace of mind of knowing that you’ll have the money you need when you need it, no matter what your case throws at you. Lawsuit funding also helps plaintiffs like you seek legal redress from your claims so you can get the compensation that’s rightfully due to you.

Over the years, Baker Street Funding has set the standard in the settlement funding industry. As a leading plaintiff funding company serving Rhode Island and other states in the U.S, we always ensure that you get nothing short of the best practices. You don’t have to go through tons of paperwork or pay high fees to fund your Rhode Island claim with Baker Street Funding. See why we may be the right fit for you:

Instead of taking out lawsuit loans at ridiculous rates that will later eat up your settlement payment, opt for a legal funding company that provides non-compounding low interest rates (between 2% to 3.4% a month).

By capping the rate, the interest stops after the cap if a claim takes longer than three years to settle. Finance modest amounts for your Rhode Island lawsuit (from $1,500 up to $2,000,000+) non-recourse.

As a respected legal funder, we are committed that Rhode Islanders make the most of their funds; many times providing same day financing. That's why we are available 24/7 to take in your application.

Other lenders offering to fund Rhode Island lawsuits, make you part with your money before offering their services. At Baker Street Funding, we don't bother our borrowers with hidden charges on contract—what you see is what you get.

Non-recourse funding means you don't have to pay back (both principal and interest rates) if your claim doesn't settle in your favor. You only pay us if you win the lawsuit in a settlement or jury verdict. Otherwise, you owe absolutely nothing.

Even if you have bad credit, your credit history is not required to obtain pre-settlement funding in The Plantation State. A bad credit score won't hinder your chances of getting your advance approved. We are only interested in making our financial resources available to help you get your finances in order, which can also benefit you in pushing your case and win the max value for your claim.

Keeping a job can be difficult during legal cases. Situations can be worse when the plaintiff has suffered injuries from accidents. At Baker Street Legal Funding, we don't consider your employment status as criteria to fund your Rhode Island case.

Simply fill out our short application form online, and a loan specialist will contact you to complete the process.

Once your application gets through, our underwriters, who are also attorneys, will immediately contact your attorney to discuss your case and determine it qualifies for legal funding In Rhode Island.

Once your case is approved; we will discuss the right amount of cash advance approval with you. If we reach an agreement, you will get your contract sent out to you and your attorney to sign.

Once we receive the dually signed and completed agreement, your bank account credited within 2-24 hours.

All lawsuit loans in the state of Rhode Island require plaintiffs to have an attorney on contingency representing them. Without an attorney, you cannot qualify for an advance.

Look no further for the best settlement loan in Rhode Island.

Baker Street Legal Funding is a direct settlement loan company serving the residents of Rhode Island and all over the USA. If you want to get hassle-free and a cash advance with low rates to cushion obligations during your litigation, Baker Street Funding is your go-to guy in Rhode Island. Our lines are open 24/7 for free consultations. Contact us today and get started on getting fast pre-settlement funding.

Baker Street Funding is proud to operate in compliance with Rhode Island regulations and upcoming government laws. Though the rules are not that strict as with legal funding, settlement loans are legal but not regulated in all states.

Legal funding in the state of Rhode Island is non-recourse; therefore, it contains no risk. Non-recourse loans do not require any form of collateral, yet the rates are higher than traditional financial institutions. Besides, we don’t take your credit story or job status into account at all. We provide you with a risk-free non-recourse cash advance where neither collateral nor guarantor is necessary, making it easier and faster to get. Still, you have to have a strong case with a well-insured defendant to qualify for the advances; this way, the repayment ability is more secured.

Can I pay off my Rhode Island settlement loan before my case settles?

We welcome you to pay your settlement loan in Rhode Island before your claim resolves, as there are no penalty fees. However, if or whatever reason you lose your case, you won’t be responsible for paying the advance.

Can I borrow money from my Rhode Island lawsuit if my case is new?

Lawsuit loans let you borrow money in the beginning stages of your case. Please contact us at 888-711-3599 to see if your case qualifies for funds.

What are the funding amounts?

Depending on your type of case and the nature of your claim, you can get between 10% to 50% of the value of your potential compensation. You can use the money to get debt under control or finance a corporate case.

Our pre-settlement loans offer up to 20% of your potential settlement value from your pending legal battle.

You could get up to 50% of your award if the case is settled. The minimum settlement amount must be $50,000 or more to qualify for a cash advance against your lawsuit.

We have a diverse funding services portfolio. For example, we offer car accident loans in installment payments or or can offer the whole approval amount to fulfill different types of needs. However the borrower desires to get funds.

During protracted litigations, most plaintiffs are faced with the financial difficulty that pushes them to settle early and take ridiculous amounts from the defendant’s attorney or insurer. While your bills won’t stop coming and things may look bleak, you should avoid the temptation of settling early. The following guide will help you understand more about your case, how the law works in Rhode Island, and how legal funding may help you and your case.

Crime rates and lawsuits in (RI)

Renowned for its sandy shores and colonial towns, Rhode Island is also home to large cities, including Newport and its capital Providence. The gilded mansions in Rhode Island are just a few of its dazzling attractions. Others include green Roger Williams Park and the popular WaterFire art installation.
Like every other beautiful state in the United States, Rhode Island also has its fair share of violent crime and property crime.
According to a recent State of Safety survey, over 50% of the population express high concern for their safety every day. With over 1 million people, that puts this state 4% ahead of the national average of 46% in 2020.
With increasing civil lawsuits in Rhode Island, the courtrooms here are on the brink of getting overwhelmed with litigations, and you know what that means — protracted court hearings, delayed settlement, and compensation.

Recent reports from the United States Department of Transportation, Rhode Island recorded 7.6 deaths per 100,000 of the population from fatal motor accidents in 2017. This is equal to 83 deaths from 76 crashes. The top causes of car crash fatalities in this area include neglect of seatbelts and driving under the influence.

The drinking rate is 2.4% compared to the national average of 1.8%, while seat belt compliance is at 78%.

Considering that the average Rhode Island resident drives an estimated 7,416 miles per year, the seat belt use rates are low.

Combined, driving too much before driving and refusal to buckle up puts Rhode Island car accident fatality rate at 4.3 compared to the national average of 10.9. The Ocean State spend about an average of $84 million yearly on car accidents.

Rhode Island adopts the comparative fault system to determine how much compensation is due to parties involved in an injury.

Each party will get as much compensation as the court finds it at fault. This means that if a plaintiff is found to be 10% at fault for their injury, their compensation will be reduced by 10%.

In deciding cases of car accidents, Rhode Island operates the fault doctrine. The fault doctrine ensures that the at-fault party takes up the financial responsibility for the harm caused.

In Rhode Island, also the minimum liability coverage is:

Like every other state in the U.S, plaintiffs have a time frame within which they are expected to file lawsuits against the other party.

If the plaintiff exceeds the time frame for their case, they lose the right to claim damages or seek compensation. This time frame is called the statute of limitations, and it differs between cases.

It would be best if you kept an eye on the deadline for filing your case. While you are at it, it would be best to discuss with your attorney for expert advice.

List of types of cases we fund in RI state