Pre-settlement funding in Virginia will provide you access to the money you need to help you cater to everyday expenses and other financial commitments during litigation. To help plaintiffs in Virginia tide over such difficult times, Baker Street Legal Funding offers lawsuit loans with low rates starting at 24% a year up to 41% a year, non-compounding. No monthly payments. No risk. 3-year cap. A cash advance on your settlement from Baker Street Funding can quickly provide you with the funds you need today—for less. 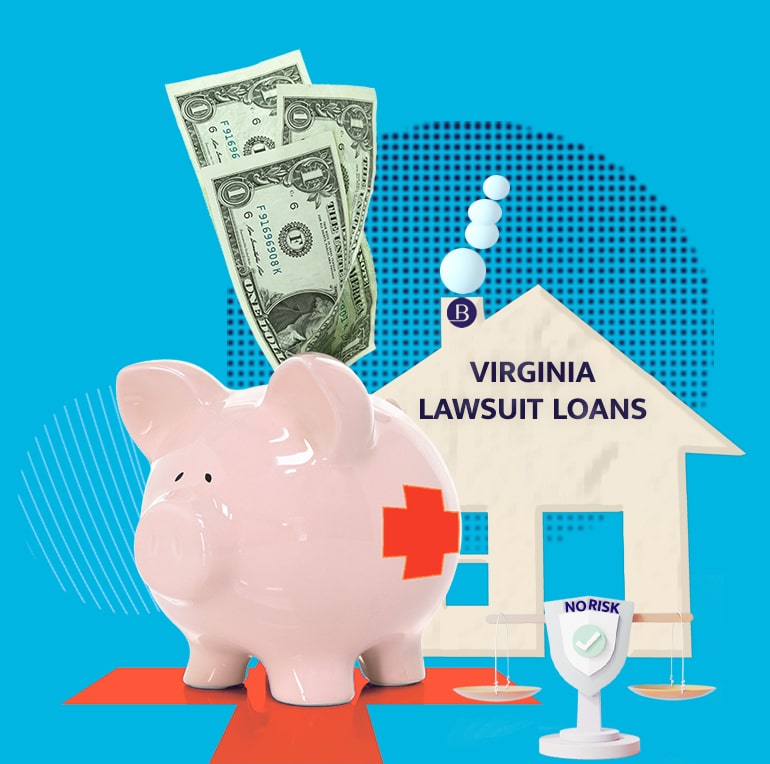 What is a risk-free lawsuit loan in Virginia?

Risk-free lawsuit funding is best described as a cash advance on your pending lawsuit settlement. This means that we can provide you with an agreed percentage of the potential settlement amount while your lawsuit is ongoing, and you repay us only if you win the case. As a reputable legal funding company serving the state of Virginia, Baker Street Legal Funding provides flexible lawsuit loans at low interest rates to help you cushion financial strain. Find transparency with our dealings and ensure you get the best settlement loan for your case.

Whether you’re ready to consolidate a lawsuit advance from another company or take out a settlement loan for the first time, a fixed-rate lawsuit loan can help you get ahead. Here are some reasons why applying for Baker Street Funding’s low rates of Virginia lawsuit loans could be convenient for you:

Our approval time is speedy and sometimes the same day. Get an application process that is easy and fast to follow through.

Our contracts are transparent and easy to understand. Sign a contract that contains no hidden fees or any shady markups.

Get a pre-settlement funding rate that works for you with a 3 year cap. If your lawsuit takes longer than 3 years to resolve, your loan rate and fees will stop.

Get the best legal funding team service and expertise to negotiate a custom funding solution for your specific situation.

Our pre-settlement funding rates in Virginia are fixed and low.

Baker Street Legal Funding provides between 2% and 3.4% non-compounding monthly interest rates. You use the cash advance on your pending case to foot your bills and avoid any financial embarrassment. Also, our pre-settlement funding veils you from the pressure to settle early or take peanuts for compensation. We offer an easy and responsive lawsuit funding application process to ensure that your loan gets across to you in record time — usually within an hour or two after approval.

The lawsuit funding process in Virginia.

Our Virginia lawsuit cash advance process is extremely fast. We have a funding team standing by 24/7 to help you in your time of need. See our 3 easy steps:

Only fill basic information online and receive a call from one of our team members to finalize your application.

Underwriting will then contact your attorney and get details about your claim and the approximate settlement date and value.

Upon approval, you will be the agreement within an hour or two. Sign the lawsuit funding agreement, and the funds are yours. Simple and fast.

Ready to apply for a settlement loan in Virginia?

With a unique funding program available to residents who are looking for pre-settlement funding in Virginia, settlement loans serviced by Baker Street Legal Funding may be able to provide no-risk funding backed by the financial stability of your future settlement. Our team may be able to put thousands of dollars in your pocket fast, with fixed rates and no monthly payments. Get in touch with us today, and let’s provide you with the best rates.

Baker Street Funding’s pre-settlement funding experts are here ready to answer any questions you may have about legal funding in Virginia. Call us at (888) 711-3599 to learn more about how settlement loans in Virginia work.

What are the benefits of settlement loans serviced by Baker Street Funding?

By choosing a settlement loan serviced by Baker Street Funding in Virginia, a borrower could get a lot of other useful benefits, and they are:

One huge benefit that comes with these loans is ease and being free of repayment. One way this is done is that borrowers are given the ability to pay the loan off only he the resolution of the case is successful.

When you are approved for a cash advance serviced by Baker Street Funding, you can be sure you will be in good hands.

There are absolutely no hidden fees in our contracts, no surprises.

Pre-settlement loans by Baker Street Funding are made to be as convenient as possible, and so when you apply, you could have the money you need the same day your attorney provides the case file.

The approval process for legal funding serviced by Baker Street Funding is extremely simple and the only requirement. is that your case is strong and that your attorney fully cooperates.

What documents do you need from my case in Virginia?

For motor vehicle accidents we need:

To learn more about what documents we need with other types of cases, please visit our pre-settlement funding required documentation page.

How much can I borrow from my Virginia lawsuit?

When will I get a funding decision?

The Old Dominion boasts a population of over 8 million spread across its beautiful cities and counties. In addition to its fascinating Atlantic coastline, Virginia is also famous for its Appalachian Mountains.

Some of the famous landmarks in Virginia include:

The most beautiful cities in Virginia have a heartwarming culture: Chincoteague,  Lexington, Smithfield, Culpeper, and Middleburg.

With its bubbling cities and a beehive of activities, Virginia also has its fair share of accidents and personal injury cases, among other lawsuits to grapple with.

Most people who live in the state use the Southwest Virginia I-81, the most dangerous road in Virginia. Other dangerous roads are Route 460 and  Interstate 77.

Sadly, these occurrences also reflect the state’s legal framework, considering many lawsuits waiting to be settled. As you would imagine, Virginia legal cases can become protracted and could drag on for months and even years.
While litigations take longer to settle and plaintiffs have to wait for an extended period to get a settlement, their bills won’t stop piling up — especially rents, feeding, tuition, and medical bills.

With this said, if you are in dire need of funds, contact us today to apply for a Virginia lawsuit loan with low rates. We will let you know if we can evaluate the case when you apply for lawsuit cash today.

Personal injury laws in the state of Virginia

The state of Virginia adopts the pure contributory negligence law, which bars you from claiming damages if you contributed to your injury.
Though considered harsh, you can only get compensation if the other party is deemed 100% responsible for your injury. Otherwise, you won’t get any financial compensation.
While you are at it, remember to consult with your attorney on the statutes of limitations for your case. The statute of limitations is a statutory time frame within which you are expected to file your claims.
If you miss the stipulated time for your case, you will lose your right to getting compensation.

You could take advantage of our free professional legal funding consultations and get started on your lawsuit loans application today. Our lines are open 24/7 to provide you with all the help you need with your lawsuit loans and guide you on making the most of your cash advance on the pending case. In order to qualify, you must have hired an attorney on contingency to help you negotiate the best amount for your case and help you understand our contract terms.

States that qualify for a settlement funding

Funding cities near you

Baker Street Funding provides lawsuit advances in every city in Virginia, including Henrico and Northern Virginia. The following are some of the cities in Virginia we fund the most: